While carrying out the process of mobile application development, software companies all over the world have the option of selecting from hundreds of libraries, tools, and frameworks. Despite the abundance of possibilities, React Native has quickly become one of the most popular solutions among corporate corporations and mobile app development firms.

The enormous benefits of React Native programming are the reason for its popularity! This framework has a lot to offer, from an easy learning curve to code re-usability, cross-platform development, high-speed development, community support, and the building of native-like apps. And, when it comes to technical features, React Native developer tools are a must-have. Some of the most important components of React Native App Development Services are these tools.

As a result, the focus of this blog is on the best React Native tools on the market. Almost every React Native app development business in the world uses them. Let us have a look at a few of them. 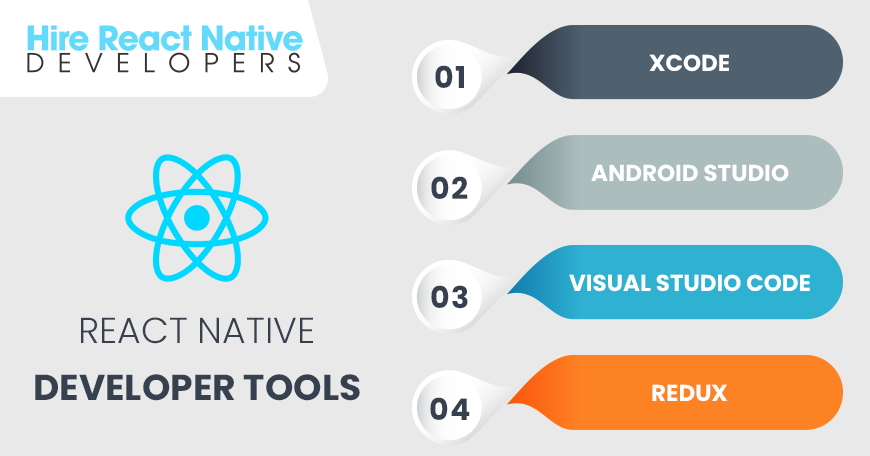 Apple’s integrated development environment (IDE) provides a number of software development tools for creating apps for iOS, MacOS, and other platforms. This is an excellent option for building robust React Native apps for iOS. It’s also a fantastic tool for iOS package debugging and installation. Apple recently released Xcode 12, which includes a slew of new features such as customizable font sizes for the navigator, new document tabs, a redesigned organizer, improved code completion, and enhanced auto-indentation, among others.

This program enables React Native development for Android, as the name implies. The biggest update was Android Studio 4.1. The latest version of Android Studio includes features such as support for Kotlin DSL in the Android Gradle plugin, a newer database inspector, the ability to run an Android emulator inside Android Studio, a visual layout editor, a faster emulator, an APK analyzer, a flexible build system, a smart code editor, real-time profilers, and much more.

Visual Studio Code, a lightweight source-code editor released by Microsoft in 2015, is a powerful source-code editor. It is written in JavaScript, CSS, and TypeScript and is open-source and free to use. It is compatible with a variety of operating systems, including Windows, Mac OS X, Linux, and others.

Node.js, TypeScript, and JavaScript are among the technologies supported by Visual Studio Code. It also has a large ecosystem of extensions that support languages like C#, C++, Python, PHP, Java, Go, and others. It also works with Unity and.NET runtimes.

Redux is a JavaScript app created by Andrew Clark and Dan Abramov that was published in 2015. It’s an open-source tool for creating user interfaces that are often used with frameworks like React, Angular, and others. It’s a little utility, with a file size of less than 2kB, including dependencies. It facilitates the development of programmers that operate in a variety of settings, including native platforms, front-end, and back-end, and are simple to test. It also includes tools such as a time-traveling debugger and real-time code editing. As a consequence, React Native development services should strongly consider using this technology for their projects.

It’s also a Microsoft free product, although it’s more of a Visual Studio Code extension. This tool offers a welcoming environment for creating and debugging React Native projects. It is one of the greatest debugging tools since it allows you to debug styles in React Native as well as React components. Furthermore, it use a “command palette” to perform the react-native command.

Visit Hire React Native developers. Our Hire Dedicated React Native App Developers have a plethora of experience and are confident in their abilities to quickly handle complex application difficulties. 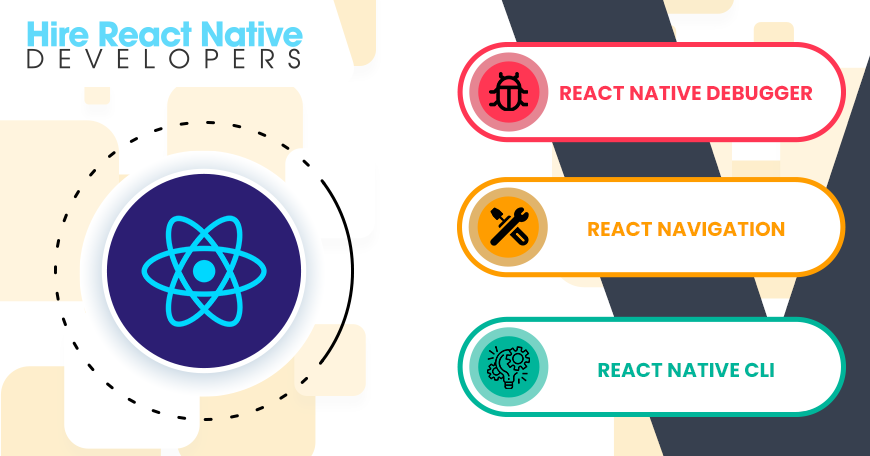 This programmer functions as a stand-alone desktop application that works with Windows, Mac OS X, Linux, and other operating systems. When React Native devs are already using Redux, it’s arguably the finest debugging tool. It includes the usual React Developer Tools as well as Redux DevTools. This tool also allows you to change the UI and analyze React Native parts.

React Navigation is written in JavaScript and is popular among developers because it allows them to create navigation and routes in native apps using navigators like as Drawer, Tab, Stack, and others. It’s a simple-to-use application with a lot of customization options and Extensible Platforms. It’s used to create visually appealing components for both Android and iOS.

React Native CLI is an MIT licensed utility that is the official CLI for the React Native framework. This utility offers an innovative approach to bootstrapping a React Native app from the command line. If a React Native developer wants to interact with the app’s native layer, this technique is necessary. It’s commonly used to automate processes like running the packager, connecting, and building applications, among other things. It’s also been known to be used as a debugging tool. Customizations are possible. It can, for example, be used to install a React Native project that has already been setup with a certain package, such as TypeScript, or even whole boilerplates.

The React Native developer tools highlighted in this blog play an important part in not only creating engaging apps, but also in greatly speeding up the development process. These are some of the best tools available, and React Native developers should be familiar with at least the ones listed.

Deepak SinghBusinessApril 29, 2022
The global artificial intelligence (AI) in the food beverages market size is expected to register a CAGR of 45.7% from 2021 to …
END_OF_DOCUMENT_TOKEN_TO_BE_REPLACED

How to Download a Canon Printer Driver from IJ.start.Cannon

matthew paulsonComputers and TechnologyOctober 17, 2022
The ij.start.canon Printer Installation Guide Canon will help you set up your Canon printer. IJ start canon, which can be …
END_OF_DOCUMENT_TOKEN_TO_BE_REPLACED

Why You Really Need an iPad Mini Case

Imran AfzalComputers and TechnologyJune 28, 2022
So why do you need the best iPad Mini case? Well, first of all, if you have one, it will …
END_OF_DOCUMENT_TOKEN_TO_BE_REPLACED

Kayla westComputers and TechnologyAugust 27, 2022
The How to activate  Cash App card is a debit card provided by Cash App and is directly connected to …
END_OF_DOCUMENT_TOKEN_TO_BE_REPLACED